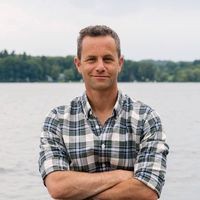 Kirk Cameron is an actor and producer. He captured America’s hearts as the lovable Mike Seavers in the wildly popular ABC sitcom, Growing Pains. Since then he’s starred in dozens of films, including Monumental, Left Behind, and Fireproof. He speaks nationwide on the topic of gospel-centered marriage and family, and lives in California with his wife, Chelsea, and their six children.