Ashley gets home from work first, so she makes dinner. David arrives and gives her a little peck on the cheek. He plays with the kids, and they all have supper. David helps the oldest child finish her homework, and together he and Ashley put the children to bed. While she does the dishes, he sits down, hunts for the remote, and catches up on the news. They spend the rest of the evening channel surfing. At ten thirty, he collects all the garbage for tomorrow’s pickup. They watch the eleven o’clock news before bedtime, when he pads off to the bathroom, does his little chores, and changes into his bedtime attire. She does the same, and they climb into bed. Perhaps they read for a while, then he reaches over and turns off his light. She reads awhile longer, then finally reaches over and turns off her light. Everything is still. And then suddenly, in the dark, there it is. A cold hand on her breast.

David kisses her ear. And seven minutes later, everything is over. David snores while Ashley stares at the ceiling. Again. When he wakes up the next morning, David wonders why Ashley always just lies there when they make love.

David probably isn’t a clod, and Ashley probably isn’t unresponsive; they’re probably both just a bit uninformed. Neither of them is demonstrating an understanding of the differences in how men and women generally view the sexual process. Their love life reflects how little they genuinely “know” each other.

So what do they—and others in the same situation—need to know? Here are some differences in how men and women tend to view the “sex” of sexual expression.

(Men and women vary in their individual responses, of course, but when they learn about how a husband and wife typically approach sex differently, it can help them see just how normal each of them are. We will speak in generalities here, but we do recognize every person is an individual, and our goal here is not to encourage gender stereotyping.)

#1. Timing
The time needed between foreplay and orgasm is very individual. Nevertheless, on average, men tend to respond more quickly physically while women tend to be moved along more gently. Some have said, “Men are like light bulbs, women are like electric irons” or “Men are like microwaves, women are like slow cookers.” One group of researchers found that men and women differ significantly in the time needed between foreplay and orgasm. The average male can go from excitation to climax in three to five minutes. But while 20 percent of women reported needing only five minutes of stimulation to reach climax, 62 percent of women surveyed need at least fifteen minutes of appropriate stimulation following arousal to reach orgasm. A small percentage need more than forty-five minutes, and 1 percent, an hour or more.

#2. Feelings
Enjoying sex may be harder for a woman if she feels angry or distracted. Some men can stop in the middle of an argument—in which anger permeates the air—and initiate sex; then they can return to a fight. A woman has a harder time shifting gears from a disagreement into sexual mode and resuming the argument afterward.

#3. Process versus event
Men tend to be event-oriented. Many husbands can see their wives in anything or nothing, and want sex. Conversely, women tend to be process-oriented. Sex for them is not an event but an environment. Thus mood and surroundings may play bigger roles.

#4. . . .
To continue reading the other differences in the sexual response cycles of men and women, preorder your copy of Sexual Intimacy in Marriage, 4th edition, by clicking the link below. 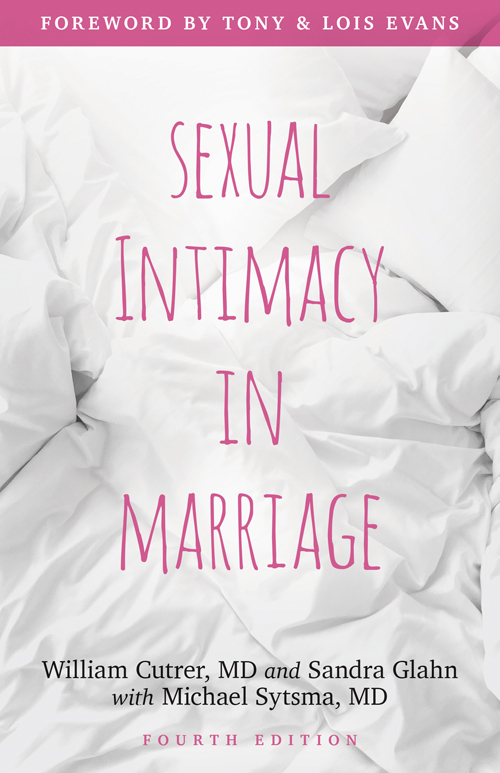 Sexual Intimacy in Marriage
William Cutrer, Sandra Glahn, and Michael Sytsma
Every couple has those questions they don't know how or whom to ask! Sexual Intimacy in Marriage discusses the basics, like the definition of marriage, and the not-so-basic topics, such as achieving sexual pleasure and biblically "OK" sexual activity. It addresses real people in the real world--without compromising God's wonderful purpose and design for his gift of sex.

This highly acclaimed, medically and biblically accurate book extensively covers sex in marriage with a sensitivity and frankness that every couple will appreciate. With over 100,000 copies in print, and now in its fourth edition, this best-selling biblically based book for nearly-weds, newly-weds, and truly-weds is the gold standard for Christian intimacy guides.