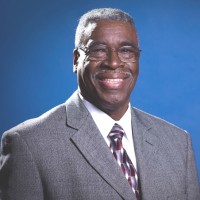 Dolphus Weary (DMin, Reformed Theological Seminary) became one of the first black students ever to graduate from the all-white Los Angeles Baptist College. In 1971, he received a Masters of Religious Education Degree from Los Angeles Baptist Seminary and a Masters in Educational Administration from the University of Southern Mississippi. He returned to Mississippi to work with Mendenhall Ministries, devoting his time to developing his impoverished Christian community. His autobiography I Ain't Comin' Back details these early years. Now an ordained minister, Dr. Weary serves part time as the president of R.E.A.L. Christian Foundation and part time as the major fundraiser for Mission Mississippi. He and his wife, Rosie, live in Jackson.