Disbelief in God is not a recent phenomenon. King David wrote some three thousand years ago, “The fool says in his heart, ‘There is no God’” (Ps. 14:1 NIV; see also 53:1). Moreover, atheism has never attracted large numbers of people. Nevertheless, because there is a small—but extremely vocal and antagonistic—faction who denies that there is a God at all, we need to respond to their challenges. Let’s dive in.

1. Atheism Is an Anomaly

People are not born atheists. In fact, the Bible teaches that God has placed an awareness of Himself in the heart and mind of every human being (Eccl. 3:11; Rom. 1:19–20). People become atheists by suppressing this innate knowledge of God’s existence (Rom. 1:18) and by exposure to secular ideas and philosophies. The fact is, only a small fraction of the world’s population questions the existence of a deity. Belief in supernatural beings is a universal ingredient in all human cultures, whether they are highly technical like the United States or primitive like the few remaining animistic societies scattered across the earth. For most people, the issue isn’t whether a God exists but what deity is like. Is God one or many? Personal or impersonal? Good and fair or harsh and capricious? Is He the God of the Judeo-Christian religion or the God of some other religion?

To argue, as many atheists do, that religious beliefs are rooted in primitive superstitions fails to account for the millions of bright, educated, modern people from all walks of life and cultural backgrounds who are convinced God does exist and has revealed Himself in ways that can be investigated and experienced. Atheists dogmatically assert that God doesn’t exist, but they can’t adequately explain the worldwide phenomenon of belief in God—nor why so many former, educated atheists, after investigating biblical revelation, have become strong, committed Christians.

An atheist is a person who denies the existence of God. A little reflection, however, reveals that the atheist’s position is indefensible. The only way anyone can prove no God exists is to be God Himself! Let me explain.

The total amount of knowledge any single person possesses is infinitesimal compared to the vastness of the universe and the immeasurable amount of information it contains. A person would have to be omnipresent (present everywhere at once) and omniscient (have all awareness and understanding) in order to have enough information to know that no deity exists. And these attributes are part of most people’s concept of God! Hence, no finite human being can prove God does not exist because God may very well exist beyond one’s comprehension or experience.

Of course, this fact stops few atheists from arguing against the existence of God. But it does illustrate that dogmatic assertions for the nonexistence of God are presumptuous and irrational. No one can prove God doesn’t exist.

We can’t deny that Christianity, just like other religions, has its dark pages in history. And atheists are quick to point out examples: slavery, the persecution of alleged witches, the Spanish Inquisition, and the Crusades. All such evil behaviors, however, have long been condemned by Christians—and are totally incompatible with Jesus’s teaching. Indeed, even a hardened atheist would find no grounds to accuse Jesus of teaching any such conduct. Moreover, even if committed by Christians, these actions do not disprove God’s existence or that Christianity is false. What atheists fail to acknowledge is that the eventual abolition of such practices were motivated by biblical values and principles. This clearly shows that atrocities carried out under the banner of Christianity are not the products of true biblical Christianity, but of evil people doing evil deeds—whether or not they claim to be Christians.

As a worldview, no other religion or secular philosophy comes even close to Christianity in terms of benefiting the human race. The kindness, compassion, and generosity of Christians have no parallel in any other religion. In the early days of the church, Christians opposed abortion and infanticide, which were common practices in the Roman Empire. Christian relief agencies are often the first on the scene anywhere in the world following natural disasters. Unlike other religions, Christianity has embraced women’s rights, established child welfare programs, and advanced other social reforms. Many of America’s great universities were originally founded by Christians, and numerous hospitals, orphanages, and charity organizations were begun and operated by Christians.

How does this compare to the godless worldview of atheism? It doesn’t. Atheism has never benefited any society or culture anywhere that it has been able to gain political control of. In fact, it has worsened the human condition. The number of people murdered under atheistic governments is staggering compared to the number of people killed under the banner of Christianity. In his book What’s So Great About Christianity, Dinesh D’Souza writes: “Taken together, the Crusades, the Inquisition, and the witch burnings killed approximately 200,000 people. Adjusting for the increase in population, that’s the equivalent of one million deaths today. Even so, these deaths caused by Christian rulers over a five-hundred-year period amounts to 1 percent of the deaths caused by Stalin, Hitler, and Mao in the space of a few decades.” Atheists may point to examples of religious brutality, but they should hang their heads in hypocritical shame when they do.

Atheism is not able to answer life’s most perplexing questions, nor does it provide any ultimate meaning and purpose to life. Atheism is not in harmony with the beliefs and values of the vast majority of people around the world. In societies where atheism has succeeded in gaining political power, humanity has been denigrated and the state of world civilization worsened.

Atheism is clearly incapable of filling the God-vacuum it wishes to create.

Find reliable answers for a new generation of seekers and skeptics with the book Defending Your Faith. 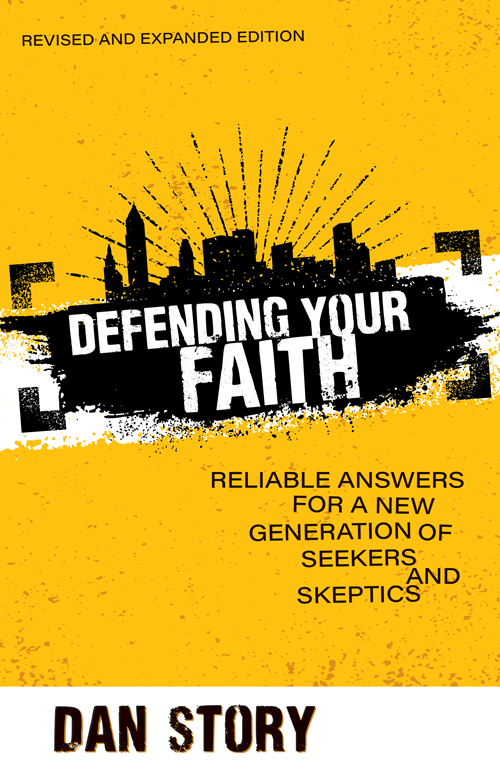 Defending Your Faith, revised and expanded edition
Dan Story
Whether you want to grow in your own understanding of Christianity or need trustworthy responses to the questions of friends, Dan Story has the answers. Defending Your Faith helps Christians see that their faith is reasonably and intelligently grounded on objective, verifiable evidence. And it equips readers to share these answers with family, friends, and coworkers who have questions about Christianity.